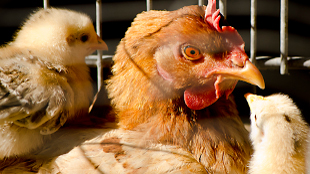 SXC.HU, PATRIZIO MARTORANAA team of Chinese researchers has shed light on how avian influenza A viruses like H7N9 spread to humans by sequencing viral genomes and piecing together the pathogen’s evolutionary history. The study, published this week (September 19) in Cell Host & Microbe, suggests two reassortment events were likely responsible for the virus’s genetic diversity.

Since March, global health officials have been keeping a close eye on China, where H7N9 made its first-ever leap from domestic birds to humans. More than 130 cases of infection had been reported by July, about a fifth of which were fatal. Most cases were contracted through direct contact with infected poultry, as the virus remains inefficient at human-to-human transmission. Just one mutation could help the virus overcome that barrier, however, which underscores the importance of understanding avian flu’s genetic variability and evolutionary history.

“A deep understanding of how the...

The team conducted whole-genome sequencing on 87 isolates of both the novel H7N9 virus and another strain, H9N2, including samples from humans, poultry, and wild birds. Their findings suggested that H7N9 may have mixed with other strains more than once—first in wild birds, and then again in domesticated birds. Such reassortment is common among influenza viruses and is thought to be behind the rapid emergence of new strains.