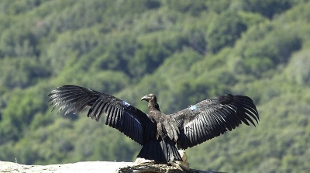 California condorWIKIMEDIA, US FISH AND WILDLIFE SERVICEThe giant ibis, the New Caledonian owlet-nightjar, and the California condor top a new list that documents the world’s most distinctive rare avian species, according to their appearance, behavior, and evolutionary history. The list, published yesterday (April 10) in Current Biology, was compiled by researchers at the Zoological Society of London (ZSL) and Yale University as part of the EDGE of Existence program, a global conservation initiative that aims to document “threatened species that represent a significant amount of unique evolutionary history,” according to its website.

“These highly distinct and endangered birds often occur far away from places that are species-rich or are already on conservation’s radar,” report coauthor Walter Jetz from Yale University and Imperial College London told BBC News. Carly Waterman, EDGE program manager at ZSL, agreed: “Half of the 100 highest ranked EDGE bird species are receiving...

The giant ibis, the national bird of Cambodia, ranked number one in the survey. The massive bird reaches heights of more than a meter, and can weigh up to 4.2 kilograms. Fewer than 230 mating pairs are alive today. The New Caledonian owlet-nightjar, the number-two most unique and distinctive bird, is even more rare, with just a handful of sightings ever recorded, and none since 1998. Fewer than 50 are believed to be alive today. The California condor ranked third; it was once at the brink of extinction, with only 21 wild birds alive in 1981.

Other species that made the list include the New Zealand kakapo, a flightless, nocturnal bird that is now extinct in its natural range, although small populations are surviving on three closely managed islands; the kagu, known locally in New Caledonia as the “ghost of the forest”; and the Forest owlet, which was once thought to be extinct, but sited in 1997. See the full list at The Guardian.