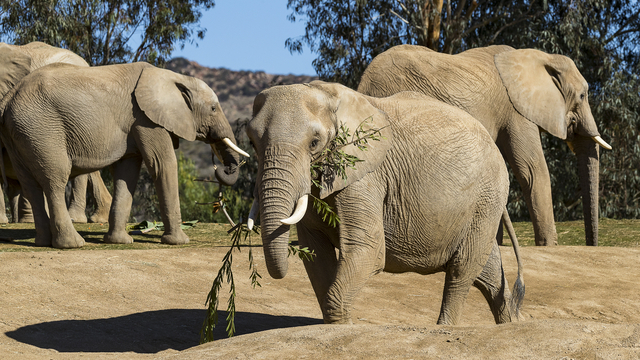 Swazi (center), a female African savanna elephant from which a reference genome was sequenced, at the San Diego ZooSAN DIEGO ZOO GLOBAL

By sequencing the genomes of 14 living and extinct species of elephantids, a consortium of researchers has found that throughout their evolutionary histories, different elephant species frequently interbred. As they describe in PNAS yesterday (February 26), the scientists sequenced the genomes of an extinct woolly mammoth, a Columbian mammoth, a straight-tusked elephant, and an American mastodon, as well as living African forest elephants, African savanna elephants, and Asian elephants.

The research “will be a reference point for understanding how diverse elephants are related to each other and it will be a model for conducting similar studies in other species groups,” says study coauthor Kerstin Lindblad-Toh, a genomicist at the Broad Institute, in a statement.

The researchers reconstructed the evolutionary history of elephants by generating genomes for...

The analysis further revealed that different elephant species regularly hybridized during their evolution. It also found that the African forest and savanna elephants appear to have diverged more than 2 million years ago, and have been genetically isolated for about 500,000 years. The finding settles the debate over whether African forest and savannah elephants are different species, with each warranting its own conservation efforts.

“Observationally, people knew that Savanna and Forest elephants did not have much interbreeding,” Rebekah Rogers, an evolutionary geneticist at the University of California, Berkeley, who wasn’t involved in the new study, tells Gizmodo. “This paper tells us that the elephants weren’t sneaking around behind our backs or passing around genes at lower rates. The genetics suggest that the rates of successful interbreeding [were] very low.”

Study coauthor David Reich, a geneticist at the Harvard Medical School, says the data show “that these two species have been isolated for long periods of time, making each worthy of independent conservation status.”