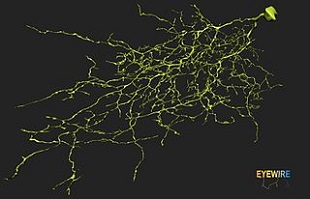 WIKIMEDIA, AMY LEE ROBINSONResearchers have solved a 50-year mystery of how the retina processes motion with the aid of citizen scientists playing an online game, according to a study published this week (May 4) in Nature. A team led by Sebastian Seung of MIT found that two bipolar neurons in the retina firing together activate a third neuron, a starburst amacrine cell, which is wired to the brain.

Initially, scientists thought the eye passed all visual information for processing up to the brain. Since the mid-1960s, though, researchers have realized that the retina is sensitive to direction and speed.

Seung is the creator of a neuron-mapping game called EyeWire. More than 120,000 gamers from 140 countries helped Seung’s team to map and color-code individual neurons and their connections in the retina. The researchers used retinal neuron wiring diagram created by the players and pieced together by...

“This is a very nice paper that poses a very clear and testable prediction about direction-selective computation in the retina,” neuroscientist Botond Roska from the Friedrich Miescher Institute for Biomedical Research in Basel, Switzerland, who was not involved in the study, told Nature News. “It’s an exciting idea, and I bet it’ll be followed by research from many labs trying test this hypothesis.”

Seung noted that the wiring diagram depicts a small fraction of the total neural connections in the retina. “There are probably other neurons that are a part of this motion-detection circuit,” he told Nature. “We need to map those out and eventually reconstruct the entire retinal connectome.”