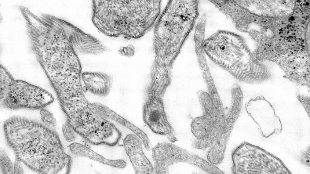 A transmission electron micrograph of mumps virionsWikimedia, Centers for Disease Control and PreventionGiving previously vaccinated children an additional dose of the measles, mumps, and rubella (MMR) vaccine helped to control an intense outbreak in a small, tight-knit religious community, according to researchers from the Centers for Disease Control and Prevention. The new study, published this week (November 5) in Pediatrics, suggests that the intervention provided a herd-immunity effect—where a significant part of a population with immunity to a particular pathogen acts as a firewall to protect the entire community by disrupting the chain of infection.

The researchers studied a mumps outbreak in an orthodox Jewish community in Orange County, New York, in late 2009 in which 400 children from three schools fell ill. Most of the children in the community had been vaccinated with the recommended 2 doses but a combination of large families and crowded schools...

So a third vaccine was administered to children with no history of mumps in the outbreak. Shortly after this intervention, the number of new cases fell across all age groups by 19.6 percent. And they dropped even more dramatically—by 96 percent—in students aged 11 to 17, a group that had experienced more intense transmission.

This decline shortly after intervention suggests that a third dose of MMR vaccine may help control mumps outbreaks in populations that already have two-dose coverage. So booster shots could be a good tactic when other approaches, such as isolation of infected individuals, fail. “I think [a third vaccine] should be on the list of first-line options for decent-sized outbreaks,” Saad Omer from the Emory Vaccine Center in Atlanta, who was not involved in the study, told Reuters.