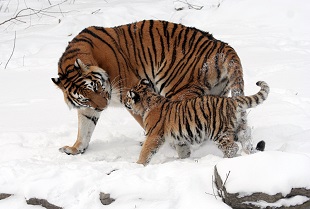 WIKIMEDIA, DAVE PAPEThe minimum number of tigers living in the wild is estimated to be close to 3,900 this year, up from 3,200 in 2010, marking the first population increase in more than a century. The new estimate was announced this weekend (April 10) by the World Wildlife Fund (WWF) and the Global Tiger Forum ahead of the 3rd Asia Ministerial Conference on Tiger Conservation in New Delhi this week.

“This is a pivotal step in the recovery of one of the world’s most endangered and iconic species,” Ginette Hemley, senior vice president of wildlife conservation at WWF, said in a statement. “Together with governments, local communities, philanthropists, and other NGOs, we’ve begun to reverse the trend in the century-long decline of tigers.”

The increase over the last six years reflects rising populations of tigers in several of 13 countries that pledged to double wild tiger numbers within...

The population estimates are subject to considerable error for some regions, such as in several countries—including Indonesia and Malaysia—that have not taken part in systematic surveys. And even in countries where population counts are more readily available, the surveys provide no information about the subspecies represented in each region, or the state of habitat fragmentation—a factor that could influence future population growth or decline.

Nonetheless, governments attending the meeting in New Delhi this week will be able to use the new estimates to inform conservation strategies aiming to boost this trend in tiger population numbers, Rajesh Gopal, secretary general of the Global Tiger Forum, told WWF. “This is a critical meeting taking place at the halfway point in the Tx2 goal,” he said. “Tiger governments will decide the next steps towards achieving this goal and ensuring wild tigers have a place in Asia’s future.”