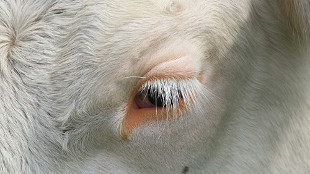 Mammals’ eyelashes are one-third the length of the eye’s width, the ideal length to create an air buffer above the cornea to reduce evaporative air flow and airborne particles that land on it by half, according to a study published this week (February 25) in the Journal of the Royal Society Interface.

To investigate the mysterious function of eyelashes, researchers at the Georgia Institute of Technology measured the eyelash and eye lengths of 22 mammalian species. From armadillos and hedgehogs to giraffes and kangaroos, the lengths of the animals’ eyelashes were proportional to eye size, averaging one-third of the eye’s width. The scientists used this information to design models and experiments.

Mathematical models demonstrated that lashes of the length seen in nature reduced the incoming air flow to the eye surface by half compared to no lashes. Optimal-length lashes created the greatest boundary layer of air...

The researchers then tested their models with a wind tunnel and an eye model: a small water-filled aluminum dish with the same dimensions as the surface as a human eye, surrounded by lashes of synthetic mesh, which behaved comparably to commercially available human hair lashes. The scientists measured eye evaporation during 10 minutes of wind tunnel exposure using a sensitive scale and found the same protective effect their models had predicted. They also tested how lashes protected the eye from airborne particles by filling the wind tunnel with fluorescent dust-sized particles floating in heavy humidifier fog. Optimal-length lashes again protected the eye by reducing the number of particles captured on absorbent paper on the eye model’s surface by 50 percent.

“It seems like nature has come to this optimal eyelash length to help protect the eye, and making eyelashes any longer doesn't really benefit them,” study coauthor Guillermo Amador told National Geographic. In addition to identifying a possible function for eyelashes, the results could be useful for keeping dust off of solar panels, the authors noted in their paper.