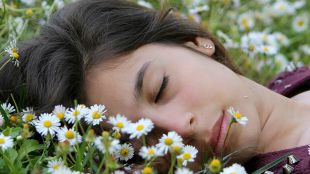 PIXABAY, GIULIAMARThe stage of sleep in which we dream is characterized by flickering eye movements (REM, after all, stands for rapid eye movement). But whether that activity beneath the eyelids correlates to what’s happening in our dreams has been tough to work out. Using in vivo neural recordings from human participants, scientists have now shown that immediately after an eye movement, activity in a brain region related to processing images spikes.

“We are intimately familiar with the activity of these neurons. We know they are active every time you look at an image, or when you imagine that image. And now we see them active in a similar way when you move your eyes in REM sleep, so it becomes very probable that the eye movements represent some type of reset, or ‘moving onto the next dream frame,’” Yuval Nir of Tel Aviv University told the BBC News....

Nir’s team took advantage of a rare opportunity to record human brains: they enrolled epilepsy patients who had electrodes implanted to monitor seizures. The researchers tracked the neural performance of the medial temporal lobe in 19 patients during sleep and wakefulness. They found that a fraction of a second after eye movement, the neurons had a burst of excitement.

Nir said the eye movements likely reflect the dream switching to a new scene. “The eye movements are not actually scanning your dream—they’re reorienting your visual thoughts,” Jim Horne, head of the Sleep Research Centre at Loughborough University who was not involved in the work, told BBC News.