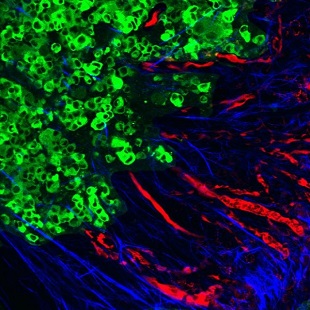 Tumor cells (green) contribute to the rearrangement of collagen into aligned fibers (blue) that facilitate metastasis via the blood vessels (red) to distant organ sites.MIT; MADELEINE OUDIN, JEFF WYCKOFFEmerging evidence suggests that metastasis—the spread of cancer from one organ or tissue to another—is aided by a significant remodeling of the cancer cells’ surroundings. Now, researchers at MIT have made progress toward understanding the mechanisms involved in this process by highlighting the role of a protein that reorganizes the tumor’s extracellular matrix to facilitate cellular migration into blood vessels. The findings were published yesterday (March 15) in Cancer Discovery.

Using a mouse model, the team showed that a cancer-cell-expressed protein called MenaINV—a mutated, “invasive” form of the cell-migration-modulator Mena—binds more strongly than its normal equivalent to a receptor on tumor and nearby support cells. The binding rearranges fibronectin in the tumor microenvironment, which in turn triggers the reorganization...

This collagen restructuring is key in facilitating the migration of tumor cells to the blood vessels, from where they can disseminate throughout the body, said study coauthor Madeleine Oudin of MIT’s Koch Institute for Integrative Cancer Research. “If you have curly, coiled collagen, that’s associated with a good outcome,” Oudin explained in a statement. “But if it gets realigned into these really straight, long fibers, that provides highways for these cells to migrate on.”

Turning to the clinic, the team also found that breast cancer patients with higher levels of MenaINV and fibronectin had poorer prognoses and a greater metastasis risk. The prognoses of patients with normal versions of the Mena protein, by contrast, revealed no such association.

Now, the researchers are working to find ways to detect and potentially block the MenaINV protein in patients as a way to help prevent cancer’s spread, said study coauthor Frank Gertler of MIT in the statement.