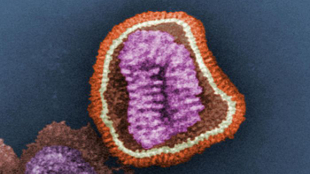 Wikimedia, Centres for Disease Control and PreventionStrains of the influenza A virus found in pigs at an Ohio county fair are almost genetically identical to the version found in human fair goers, according to a report out last week (October 25) in Emerging Microbes and Infections. The findings suggest that there are little or no biological barriers to transmission between pigs and humans.

In September, the Centers for Disease Control and Prevention (CDC) confirmed 107 human cases of H3N2v influenza in Ohio since July 2012. The majority occurred in young people involved at agricultural fairs, where flu-infected pigs with no obvious symptoms are exhibited. Most of the human illnesses were mild, but one infected person, who had a compromised immune system, died.

To confirm that the pigs and humans were infected with the same virus, researchers at Ohio State University sequenced the genomes of H3N2 viruses recovered from...

"This study presents clear molecular evidence that pigs and humans were concurrently infected with the same strain of influenza A virus at an Ohio county fair in July 2012," the authors wrote. “The lack of difference between the genotypes of these isolates suggests that there are virtually no innate species barriers preventing bidirectional interspecies transmission of [the] viruses between humans and pigs.”