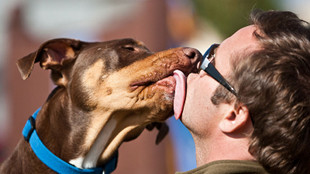 WIKIMEDIA, MIKE BAIRD FROM MORRO BAY, USAHaving a dog influences which bacteria pet owners harbor on their bodies, according to a study published in the journal eLife last week (April 16). Dog owners have more similar microbial inhabitants to each other than to people who do not own dogs.

Researchers sampled microbes from the mouths, feces, and skin of 60 families, either with children, dogs, neither, or both. Overall, bacterial differences within families were smaller than differences between the families, especially when it came to skin bacteria. Couples tended to share bacteria with each other more than with their children. And couples had more bacteria in common with each other if they owned a dog than if they did not, while sharing children had a smaller influence on how many bacteria the couples shared.

“One of the biggest surprises was that we could detect such a strong connection between...

Dog owners especially tended to be enriched in a family of bacteria called the Betaproteobacteria, which are abundant in dogs’ mouths. The dog owners also had extra soil bacteria, which were also found on dogs’ paws and foreheads. Dogs did not influence the bacteria in people’s mouths and guts, though human cohabitants did tend to share these bacteria with each other.