Scientists have thought of fat cells as being fixed in place, but live imaging of these cells in Drosophila shows that they can in fact move—and after an injury, they will wiggle over to the wound and help clear it up. In Developmental Cell yesterday (February 26), researchers reveal fat cells cooperating with immune cells to remove cellular material, releasing antimicrobial compounds, and closing up a wound in epithelia.

“It’s like a cleaner, sweeping the stuff to the side,” coauthor Paul Martin of the University of Bristol tells The New York Times. “Then, the immune cells are all hanging out at the edge clearing the debris. So it’s a collaborative effort.”

The discovery began when coauthor Anna Franz of the University of Bristol was...

Nevertheless, Franz and her colleagues investigated, and by removing contractile proteins from the cells they confirmed that indeed these fat cells were projecting themselves. To observe fat cells’ behavior after an injury, the researchers took a laser and made a small cut in the thoraces of pupae. They watched the cells move to the wound, and the larger the wound, the more fat cells arrived.

The research team found that the cells moved in an unusual fashion, not by adhering to epithelial substrates or pushing off with filipodia, but by squeezing and contracting themselves. “To our surprise,” they write in their report, “live imaging . . . revealed that these cells were constantly undergoing actin-based contractile waves that initiated from the cortex of the cell center and extended to the rear of the cell, propelling them in the opposite direction (i.e., forward) in a peristaltic fashion.”

It’s not clear whether this phenomenon occurs in other animals. In the statement, Martin says it’s worth looking into. “It’s not crazy to think that they might travel to a wound and do important things when they get there.” 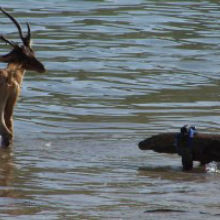