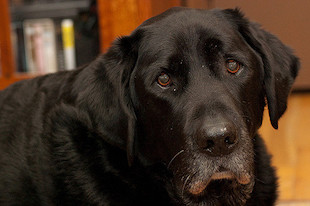 FLICKR, ROBERT & PAT ROGERSScreening the DNA of more than 300 Labrador retrievers, scientists at the University of Cambridge, U.K., found that a mutant form of the POMC gene is associated with obesity and appetite. The findings could have implications for understanding obesity in humans, according to the team’s study, published yesterday (May 3) in Cell Metabolism.

“What we have found is that some Labradors get fat because they have a deletion in a gene within their brain,” study coauthor Giles Yeo of Cambridge told BBC News, adding: “some Labradors don't know how much fat they have and so keep eating to try to get fatter.”

Up to two-thirds of dogs in developed countries are overweight, and Labradors are typically the most obese and food-driven of all breeds, the BBC reported. Yeo and colleagues found that nearly a quarter of all the dogs they studied carry at...

The mutant gene was more common in Labradors that work as assistance dogs than as pets. Since food rewards are frequently used to train service animals, this gene may have been selected for by humans, Yeo told New Scientist.

“Further research in these obese Labradors may not only help the wellbeing of companion animals but also have important lessons for human health,” study coauthor Stephen O’Rahilly of the Wellcome Trust-Medical Research Council Institute of Metabolic Science told the BBC.