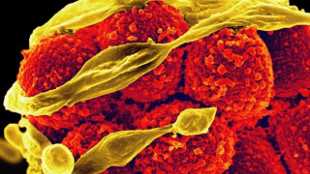 WIKIMEDIA, NIAID/NIHWhite blood cells, like neutrophils and macrophages, are well-known members of the team of that protects mammals from skin-invading pathogens. But a study published last week (January 2) in Science revealed that the body’s defense squad also includes a rather surprising member: fat. Not only do fat cells increase in number and size around the site of a skin infection, they also produce their very own antibiotic.

While white blood cells must first make their way to the site of infection, fat cells already in the area can react much faster, researchers from the University of California, San Diego Medical School have found. Richard Gallo and his colleagues injected mice with methicillin-resistant Staphylococcus aureus (MRSA), finding that the layer of fat around the injection site grew thicker because of increased numbers of fat cells, or adipocytes. Mice that couldn’t make new adipocytes were less able to combat MRSA...

Surprisingly, the infection also triggered the fat cells to produce an antibiotic peptide called cathelicidin. “It was not known that adipocytes could produce antimicrobials, let alone that they make almost as much as a neutrophil,” Gallo said in a statement. The researchers also showed that human adipocytes can make the same antimicrobial compound in vitro, suggesting that similar mechanisms of protection could also be active in people.

However, more fat doesn’t necessarily mean a better response to infection, the authors cautioned. In fact, the high levels of cathelicidin pumped out by the fat cells could lead to inflammatory diseases such as lupus and psoriasis, and obese mice the researchers studied were less able to fight MRSA infection than animals of healthy weight. Together, the results suggest that a healthy amount of fat seems to be the key to a strong immune system, John Alcorn of Children's Hospital of Pittsburgh and Jay Kolls from the University of Pittsburgh who were not involved in the study wrote in a commentary accompanying the article.