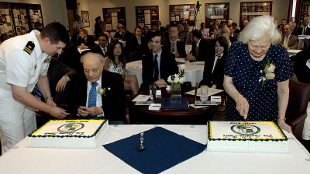 Jerome (left) and Isabella Karle cut their respective cakes as they retire from the Naval Research Laboratory after a combined 127 years of government service. WIKIMEDIA, US NAVY, JOHN F. WILLIAMSChemist Jerome Karle, who shared the 1985 Nobel Prize in Chemsitry for his help in developing the now-ubiquitous imaging technique of X-ray crystallography, died earlier this month (June 6) at the Leewood Healthcare Center in Annandale, Virginia. He was  94.

“[Molecular] structures are solved all over the world on a daily basis,” Louis Massa, a professor of physics and chemistry at Hunter College in Manhattan and a collaborator with Karle on more recent research told The New York Times. “It’s one of those things that’s taken for granted now.”

Karle developed the technique with colleague Herbert Hauptman, with whom he had attended City College in New York in the 1930s. Following World War II, the duo took a...

“In the beginning, people didn’t understand what my father was saying,” Karle’s daughter Louise Karle Hanson told the NYT, adding that she could “remember his frustration.”

But after Karle’s wife Isabella joined his team and used the new technique to unveil the structures of previously intractable molecules, “it started to get a lot of attention,” Isabella Karle told the NYT.

The use of X-ray crystallography accelerated rapidly in the 70s as advances in computer science supported the mathematical calculations required for extracting structural patterns from the light patterns. Today, it is widely used by labs around the world. In 1985, the Nobel committee noted that “knowledge of the exact molecular structure is absolutely necessary . . . in order to understand the nature of chemical bonds, the function of molecules in biological contexts, and the mechanism and dynamics of reactions.”

Karle is survived by his wife and daughter Louise, as well as two other daughters and four grandchildren.