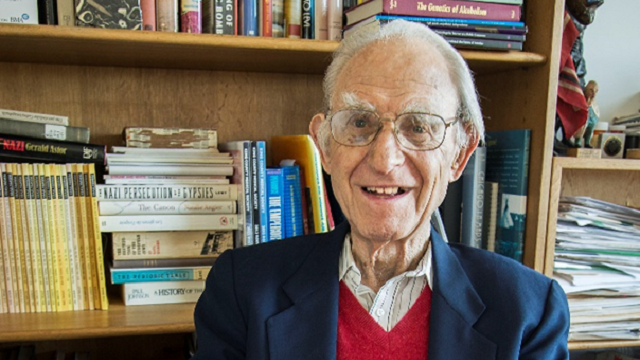 CLARE MCLEAN/UW MEDICINEArno Motulsky, a pioneer of medical genetics at the University of Washington, died earlier this month (January 17) surrounded by his children. He was 94.

Among his many contributions to science, Motulsky is credited with founding the field of pharmacogenetics—the study of genetic influences on drug response. “The relationship between heredity and the response to drug therapy—nobody was thinking about that until he started, 60 years ago,” Francis Collins, director of the National Institutes of Health, tells The New York Times. “He anticipated it decades before science made it possible to get the answers that he dreamed of.”

Born into a Jewish family in the summer of 1923 in East Prussia, Motulsky was forced to flee an increasingly hostile Nazi rule at the age of 16. After a boat carrying him and other Jewish refugees was refused entry at both Cuba and the U.S., he...

In 1947, Motulsky graduated from the University of Illinois with an MD, and, following several residencies, accepted a faculty position at the University of Washington in Seattle in 1953. It was here, a few years later, that he would open one of the country’s first divisions of medical genetics, drawing an early link between genetic research and the potential to tailor medicine to individual patients. “The field is now integrated into every other field of medical practice, and has become the soul of precision medicine,” University of Washington geneticist Mary Claire King tells The New York Times.

During his tenure, Motulsky applied his research to various medical problems, including blood disorders, colorblindness, and alcoholism. One of his most cited studies, with more than 5,000 mentions since it was published in JAMA in 1995, drew a link between blood levels of the amino acid homocysteine and risk of heart disease, along with potential medical countermeasures. Speaking to The Scientist in 1997, Motulsky attributed the paper’s popularity to “the importance of the problem, the showing quite clearly of a somewhat novel risk factor, and, most excitingly, the possibility of being able to do something about [it].”

In addition to research contributions over his 60-year career, Motulsky played an active role in science policy and advocacy, helping to found what is now the National Academy of Medicine and acting as an advisor to the World Health Organization, the National Research Council, and the President’s Commission on Bioethics, among other organizations. His awards include the Alexander von Humboldt Award and a Lifetime Achievement Award from the American College of Medical Genetics and Genomics.

Considered a talented teacher and mentor by colleagues and students, Motulsky continued to take part in scientific discourse at the University of Washington well into his 90s. “He was always willing to offer sage advice and always current with the scientific literature,” Gail Jarvik, a University of Washington professor, says in a statement. “Fittingly, on his last day at the University, he attended the seminar of a former trainee, and asked an insightful question.”

Writing an invited autobiography for the Annual Review of Genomics and Human Genetics in 2016, Motulsky described the last 70 years of his career as “a great adventure.”

“I came both to America and to human genetics by a circuitous and ultimately very fortunate route,” he said. “I hope the next generation of geneticists will enjoy reading about it.”