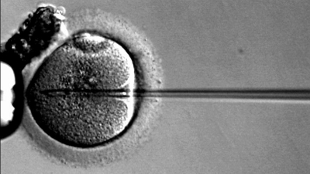 WIKIMEDIA, EKEMTo prevent the passage of mitochondrial disorders from mother to child, researchers have devised a clever solution: take the nucleus of a woman carrying harmful mutations in her mitochondrial DNA and transfer it to an enucleated egg of another woman without such defects. The hybrid egg, which carries the nuclear DNA of the mother-to-be and healthy mitochondria from the egg donor, can then be fertilized in vitro with sperm from the would-be father, and the resulting embryos implanted into mom.

The technique has proven successful in human cells in the lab, and has even resulted in the generation of seemingly healthy rhesus monkeys. But such three-way parenthood in vitro fertilization (IVF) is not without controversy, with many concerned scientists and citizens raising legal, ethical, and logistical issues. Next week (October 22), the US Food and Drug Administration (FDA) will meet in Silver Spring, Maryland, to discuss these...

High on the FDA’s list of items to discuss is undoubtedly the safety concerns that have been raised. When developing three-parent embryos in the lab, developmental biologist Shoukhrat Mitalipov at Oregon Health & Science University in Beaverton detected genetic abnormalities in about half of them, Nature reported. Furthermore, some researchers have concerns about the compatibility of the mitochondrial and nuclear DNA from two different donors, and others note that the combination could cause epigenetic alterations that affect gene expression.

But the rhesus monkeys born from three parents are now more than four years old and still doing well, Mitalipov pointed out, and in March, the UK Human Fertilisation and Embryology Authority (HFEA) gave its approval for a human trial testing the technique, though Parliament still has to weigh in on the issue before such studies can begin. Mitalipov told Nature that he will consider pursuing human testing in whichever country allows it first. “Patients are suffering the same issues, no matter where they are,” he said.