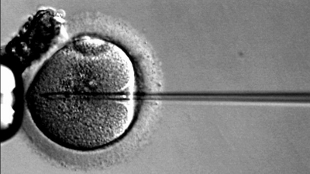 Sperm is injected into an oocyte in IVFWIKIMEDIA, EKEMThe US Food and Drug Administration’s Cellular, Tissue, and Gene Therapies Advisory Committee is conducting a public hearing to determine the fate of an in vitro fertilization (IVF) technology that could potentially combine DNA from three people to make babies with a reduced risk of developing mitochondrial diseases. The hearing could pave the way for the technology, called oocyte modification, to be tested in clinical trials soon, even if the committee doesn’t advocate for such trials explicitly. “Our job will be purely to air the issue and bring it out into the open,” Evan Snyder, chair of the committee and director of the Stem Cell and Regenerative Biology Program at Sanford-Burnham Medical Research Institute in La Jolla, California, told Scientific American. “We’re not going to come out at the end of the meeting and say we are advocating for...

Oocyte modification, which involves transferring nuclear DNA from an egg cell of a woman with mitochondrial defects into the egg cell of an IVF donor egg with normal mtDNA, has already been used in monkeys and human embryos. Some critics have raised ethical and logistical issues regarding the technique, but others stress the importance of pressing on in order to address mitochondrial diseases, which occur in about one in every 5,000 live births.

The FDA committee will conclude its hearing on oocyte modification today (February 26).