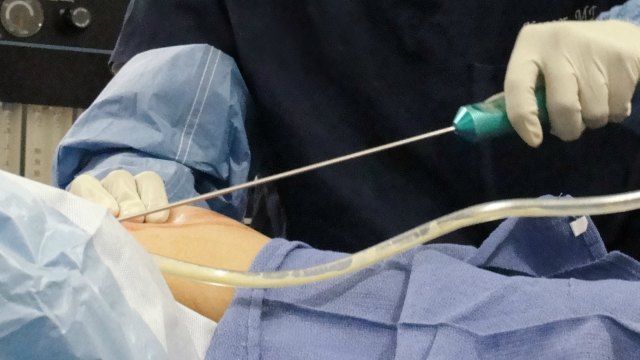 WIKIMEDIA, BESTINPLASTICSLast Friday (August 25), agents from the US Food and Drug Administration (FDA) seized five vials of live smallpox vaccine from a medical outfit in California that was using it in combination with fat-derived stem cells to treat patients with cancer. “The unproven and potentially dangerous treatment was being injected intravenously and directly into patients’ tumors,” according to a statement from the FDA.

The day before, the agency sent a letter to Florida-based US Stem Cell Clinic, detailing its deviations from the law. Among them: not having a license for its autologous stem cell treatments, which are given to patients with Parkinson’s disease, Crohn’s, congestive heart failure, and other conditions. The FDA also says the business didn’t ensure sterility of its products, follow proper procedures for cleaning equipment, or require staff to wear clean clothing. US Stem Cell Clinic has 15 days to outline how it will correct...

“Stem cell clinics that mislead vulnerable patients into believing they are being given safe, effective treatments that are in full compliance with the law are dangerously exploiting consumers and putting their health at risk,” FDA Commissioner Scott Gottlieb says in a press release.

According to The New York Times, California-based StemImmune says it obtained the smallpox vaccine legally. But the Centers for Disease Control and Prevention, which supplied some of it, alleges that the company didn’t disclose its intention of treating patients, instead asking for the vials to immunize staff members doing cancer research.

There are numerous stem cell clinics in operation in the U.S., which Gottlieb says will be “vigorously” investigated. The Washington Post repots that the FDA will develop clear guidelines for how they might achieve the agency’s blessing.

“I’m encouraged by today’s news but it is premature to claim that the FDA has cracked down on such businesses or will definitely do so over the next several months,” University of Minnesota bioethicist Leigh Turner tells HealthNewsReview.org. “It is relatively easy to make bold pronouncements. We’ll see whether the FDA is prepared to engage in the difficult work needed to better regulate this marketplace.”