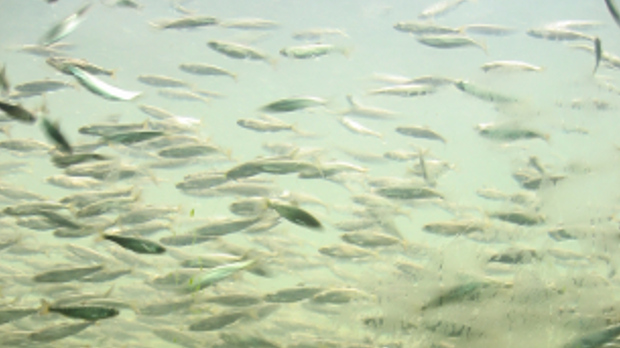 Non-GM salmon in a hatcheryWIKIMEDIA, BUCHANAN-HERMITAfter nearly 20 years in review by the US Food and Drug Administration (FDA), the agency today (November 19) approved AquaBounty Technologies’s AquAdvantage salmon, an Atlantic salmon engineered to have a growth hormone gene from Chinook salmon and a promoter from the eel-like ocean pout. The announcement marks the FDA’s “first approval for a genetically engineered animal intended for food,” the agency said in a statement.

“FDA’s regulatory decision regarding the AquAdvantage was unprecedented and today’s decision is long overdue,” Alison Van Eenennaam of the University of California, Davis, said in a statement sent to reporters.

“The FDA has thoroughly analyzed and evaluated the data and information submitted by AquaBounty Technologies regarding AquAdvantage Salmon and determined that they have met the regulatory requirements for approval, including that food from the fish is safe to eat,” Bernadette Dunham, director of the FDA’s Center...

The fish—which grow nearly twice as fast as conventional salmon—can only be raised in two contained, land-based tanks in Canada and Panama, the agency noted. “The FDA has determined that the approval of the AquAdvantage Salmon application would not have a significant environmental impact because of the multiple and redundant measures being taken to contain the fish and prevent their escape and establishment in the environment,” according to the press release.

In a statement emailed to reporters, William Muir of Purdue University in Lafayette, Indiana lauded the approval. “The current practice of using wild caught salmon as a food source is not sustainable; our oceans are over fished,” he said. “This development provides a safe and sustainable alternative.”