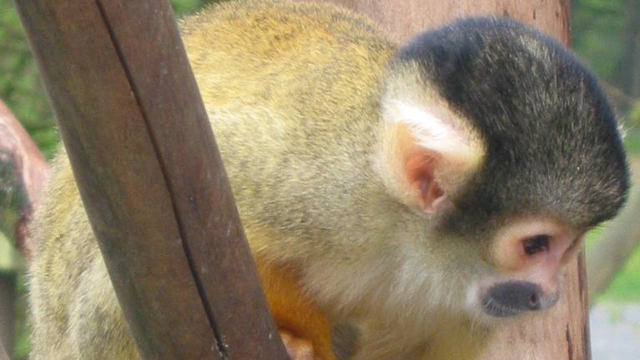 WIKIMEDIA, BORIS23The US Food and Drug Administration (FDA) has paused a study of nicotine addiction in squirrel monkeys that primatologist Jane Goodall objected to. She wrote a letter—in which she called the research “horrific”—to FDA Commissioner Scott Gottlieb. Although Gottlieb communicated with Goodall, an FDA spokesman tells The Scientist that the agency's decision to stop the study was independent of her plea. The letter from Goodall, an outspoken animal rights advocate, was posted on the website of the White Coat Waste (WCW) Project, an organization that seeks to stop animal research funded by US taxpayers, earlier this month (September 7).

According to the Washington Post, Gottlieb responded to Goodall on Monday (September 25), saying that he would temporarily suspend the three-year-old study, which FDA researchers are conducting at the agency’s National Center for Toxicological Research in Arkansas. The FDA commissioner reportedly assured Goodall that he made the decision...

In her letter, Goodall took issue with the fact that juvenile monkeys were being implanted with devices that delivered nicotine directly into their systems and then taught to press a lever that dosed them with the drug. She also claimed that the animals were isolated in cages for “nearly three years,” and referenced video footage that exists documenting the conditions. “To continue performing nicotine experiments on monkeys when the results of smoking are well-known in humans—whose smoking habits can still be studied directly—is shameful,” Goodall wrote. “I’m sure that most Americans would be horrified to learn their tax dollars are paying for this abuse.”

The WCW apparently asked Goodall to write the letter after obtaining information about the research, which involved 12 adult and 12 adolescent monkeys, via the Freedom of Information Act.

While the WCW applauded the FDA’s decision to halt the trial, others in the scientific community expressed their displeasure with Goodall’s assertions. An editor writing last week (September 20) on Speaking of Research, a website for an animal research advocacy group, decries Goodall’s lack of “relevant credentials,” her propagation of “factual inaccuracies” in her letter describing the squirrel monkey research, and her “sweeping assumptions.”

“Studies such as those conducted by the FDA in animals, including monkeys, will teach us how these new delivery methods affect the brain and body, which will in turn lead to recommendations for regulation of these products and potential treatments for addiction,” the editor writes. “Despite these life-saving benefits, Goodall and WCW call for an end to this line of research in their letter.”

Correction (September 27): We have updated the first paragraph to indicate that Goodall’s letter did not influence Gottlieb’s decision to stop the study. The Scientist regrets the error.