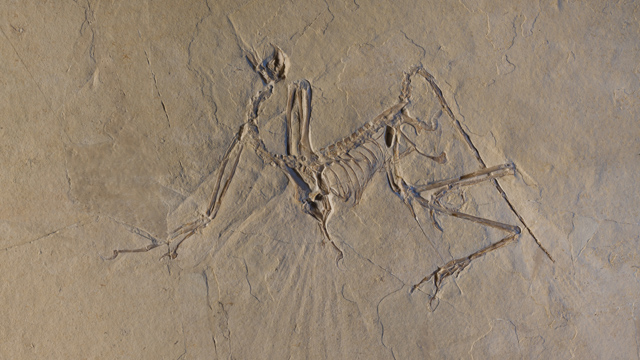 “It’s amazing that we finally know something about the internal bone anatomy of this fossil and we can see the inside of their bones. No one would ever allow the bones to be sectioned and this has now been done with virtual imaging,” Gareth Dyke, a paleontologist at Debrecen University in Hungary who was not involved in the study, tells The Guardian. “This...

Scientists have batted about the question of whether Archaeopteryx could fly since it was first identified in 1861. Many thought the dinosaur was only able to glide, since past studies suggested that it didn’t have the chest muscles needed for flight and that its feathers were too fine to support flapping.

The new analysis, however, revealed that “the bones of Archaeopteryx plot closest to those of birds like pheasants that occasionally use active flight to cross barriers or dodge predators, but not to those of gliding and soaring forms such as many birds of prey and some seabirds that are optimized for enduring flight,” Voeten explains in a statement.

“This is the best indication for active flight in Archaeopteryx that we’ve had in 150 years,” he tells The Guardian. “But I am under no illusion that this will end the debate.”

Critics point to the musculature of Archaeopteryx as a problem. “Their results convincingly show that it could do active flight,” once it was already airborne, ornithologist Gerald Mayr of the Senckenberg Research Institute Frankfurt who was not involved in the research, tells Science News. “What they do not explain is how it would have been possible to produce strong flapping flight to take off from the ground.”

Since the dinosaur “lacked the pectoral adaptations to fly like modern birds, the way it achieved powered flight must also have been different. We will need to return to the fossils to answer the question on exactly how [it] used its wings,” Voeten says in the statement.