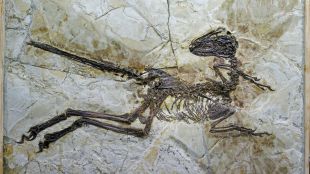 JUNCHANG LUA fossil discovery by a farmer in northeastern China has led to the identification of a new species of dinosaur, Zhenyuanlong suni, a five-foot-long, turkey-looking critter with layers of feathers and short, winglike arms.

The specimen was “the single most beautiful fossil I have had the privilege to work on,” Stephen Brusatte, a University of Edinburgh paleontologist who published his team’s findings in Scientific Reports last week (July 16), told BBC News.

Although the close relative of Velociraptor was covered in feathers and appears to have wings, the animal likely didn’t fly. “I would expect that muscle power, forelimb bone strength, and stability (the short arms would tend to make it unstable in pitch) might all be issues that could stop Zhenyuanlong from being able to fly,” Michael Habib of the University of Southern California told Live Science.

Brusatte wrote at The Conversation that Zhenyuanlong...

What purpose those lush feathers and flightless wings served is unclear. So, too, is why wings evolved. “Did they evolve for flight, or did they first develop for something else, and were later co-opted to be used as an airfoil?” Brusatte wrote. “We don’t know the answer yet, but since new fossils of bird-like dinosaurs are being found at an incredible rate, maybe we’ll have it solved by the time the next Jurassic Park comes out.”