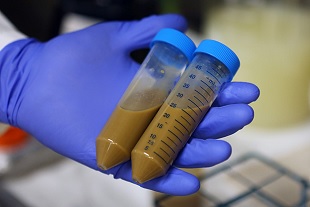 WIKIMEDIA, CJC2NDFecal matter transplantation can help to boost populations of “good” gut bacteria in patients undergoing treatment for persistent infections by pathogenic bacteria such as Clostridium difficile, and is being trialed as a therapy for other gastrointestinal problems like irritable bowel syndrome and ulcerative colitis. But bacteria are not the only microbes being transplanted, according to a study led by researchers at the University of Pennsylvania’s Perelman School of Medicine. The findings, published today (March 29) in mBio, show that nonpathogenic viruses also make the trip.

“Donors are screened very extensively for gastrointestinal diseases and other infectious diseases,” study coauthor Frederic Bushman of Penn said in a statement. “However you worry about the unknown unknowns, infectious agents that might be bad, but [are] not screened for.”

To investigate what else might be transplanted by the technique, the researchers analyzed fecal matter administered to three children with...

“We could see bacterial viruses moving between humans and we were able to learn some things about transmission,” said Bushman in the statement. However, he added, “we did not see any viruses that grow on animal cells that may be of concern for infecting and harming patients. We saw mostly temperate bacteriophages.”

These phages are of relatively little concern as a health risk, although they could conceivably carry toxins or contribute to antibiotic resistance in a recipient. In their paper, the authors concluded that further characterization of the microbes being transferred during fecal transplantation could help to “guide development of safest practices.”