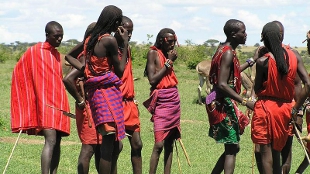 The Maasai tribe in Kenya WIKIMEDIA, MATT CRYPTOMore than 20 percent of female bioanthropologists who took part in a new survey are victims of “physical sexual harassment or unwanted sexual contact” in the course of their scientific research, primarily at the hand of superior professional colleagues, even their own mentors.

After talking to a friend that had been raped by a colleague, anthropologist Kathryn Clancy of the University of Illinois, Urbana-Champaign decided to look into the matter further.  “It was like a slap in the face to learn that this was happening to my friends,” Clancy told ScienceInsider.

She began posting anonymous stories of sexual harassment, shared with her by her female colleagues, on the Scientific American blog Context and Variation. The stories began to draw comments of other researchers’ harassment stories. “This is definitely not limited to just my discipline,” Clancy told ScienceInsider—nor is...

To get a better handle on the frequency with which such harassment occurs, Clancy and colleagues conducted a (still ongoing) online survey, asking scientists to report on their field-work experiences. Preliminary results, presented Saturday (April 13) at the American Association of Physical Anthropologists (AAPA) annual meeting in Knoxville, Tennessee, indicated that about 30 percent of both men and women reported the occurrence of verbal abuse “regularly” or “frequently” at field sites. And 21 percent of women reported having experienced physical sexual harassment or unwanted sexual contact; one out of 23 men also reported such abuse.

Notably, fewer than 20 percent of the reported cases of harassment involved the local community; rather, most of the abuse came from other researchers, primarily those further along in their careers. But why are such experiences so rarely reported?

“Quitting a field site, not completing and publishing research, and/or loss of letters of recommendation can have potent consequences for academic careers,” collaborator Katie Hinde of Harvard University told ScienceInsider. “Taken together, these factors result in a particularly vulnerable population of victims and witnesses powerless to intervene. As a discipline, we need to recognize and remedy that an appreciable non-zero number of our junior colleagues, particularly women, are having to endure harassment and a hostile work environment in order to be scientists.”