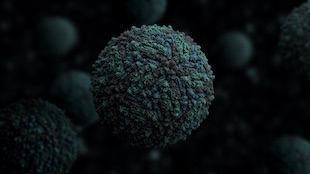 Zika virusWIKIMEDIA, MANUEL ALMAGRO RIVASZika virus is known to be sexually transmitted, but until now, all reported cases were of men passing it on to their female or male partners. Today (July 15), the US Centers for Disease Control and Prevention (CDC) reported the first case of female-to-male sexual transmission of the virus. A woman in New York had unprotected vaginal sex with a male partner the day she returned from an area with active Zika transmission. Both partners subsequently developed symptoms of infection and later tested positive for the virus in their blood and/or urine.

Previous studies of sexual transmission of Zika have suggested that the virus can...

According to a May case study published in The Lancet Infectious Diseases, researchers at a hospital in Pointe-à-Pitre, Guadeloupe and their colleagues detected Zika virus in the genital tract of a local woman; the pathogen survived at least 11 days—longer than in her blood or urine, The Atlantic reported. “Our findings raise the threat of a woman potentially becoming a chronic Zika virus carrier, with the female genital tract persistently expressing the virus RNA,” the researchers wrote in that study. “Additional studies are underway to answer those essential questions and to assess what would then be the consequences for women of child-bearing age.”

The CDC said it is currently updating its recommendations for sexually active couples that are not attempting to get pregnant but want to reduce their risk of Zika infection.