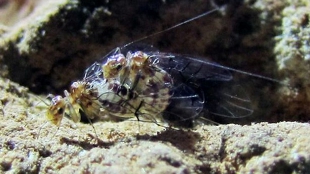 A male (bottom) and female Neotrogla matingYOSHIZAWA ET AL., CURRENT BIOLOGY (2014)Like most sex-role reversed organisms, populations of insects called Neotrogla have aggressive, promiscuous females and males who tend to be choosier about whom they mate with. But unlike other species that follow such a reversed pattern of sex-specific behaviors, these tiny winged insects seemed to have also swapped genitalia.

In a study published last week (April 17) in Current Biology, researchers described the female Neotrogla’s “elaborate penis-like organ,” which they call the “gynosome.” The organ is used “as an intromittent organ [that] anchors the female to the male [during copulation],” the researchers wrote, which can sometimes last for days and often results in the transfer of “a large and potentially nutritious ejaculate” from the male. The authors thus speculate that the “genital evolution in Neotrogla is probably driven by reversed sexual selection with females competing...

Neotrogla were first described in 2010, after ecologist Rodrigo Ferreira from the Federal University of Lavras in Brazil spotted them in the country’s caves and entomologist Charles Lienhard at the Geneva Museum of Natural History in Switzerland suggested they represented a new genus, Nature reported. In the new work, entomologist Kazunori Yoshizawa of Hokkaido University in Japan and his colleagues describe the mating behavior of four Neotrogla species: the female mounts the male, sticking her gynosome into an opening on his back, at which point the organ swells and spines along its exterior help lock her tightly to her mate. (Indeed, when the researchers tried to separate a copulating pair, they accidentally ripped the male in half; his genitals remained attached to the female.) After 40 hours to 70 hours, the male transfers a large capsule of sperm, and copulation is complete.

The researchers also noted that the driving force in the evolution of the Neotrogla mating system was likely a lack of resources, with food (primarily bat guano) hard to come by in the dry caves that the insects call home. Indeed, Yoshizawa’s team found evidence that females accept such seminal gifts even before they’re of reproductive age, suggesting that the nutrients are beneficial even when the insects are not laying eggs.

Yoshizawa and his colleagues suggest that the female penis may represent a true evolutionary novelty. “Usually a new structure evolves as a modification of a previously existing structure,” he told New Scientist. “Evolution of such novelties is exceptionally rare.”