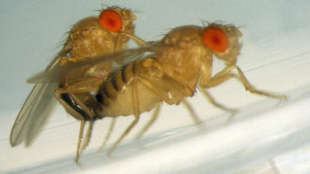 FLICKR, IMAGE EDITORFemale Drosophila that are infected with bacteria are somehow able to boost the genetic diversity of their offspring, according to a study published last week (August 13) in Science.

Most organisms on the planet must have sex to reproduce. Although this means only passing along half of one’s genome to each offspring, sex also carries significant benefits, such as diversifying the genetic makeup of one’s descendants. This can give offspring a critical leg up when faced with a harsh or changing environment—or disease. Arabidopsis plants, for example, have been found to increase the frequency of DNA recombination when infected with a virus. But it was not known whether the same occurred in animals.

Nadia Singh of North Carolina State University in Raleigh and her colleagues decided to test this idea in D. melanogaster, infecting female flies with different bacteria before they mated. Sure enough,...

“One way to look at it is that if parasites are specialising on any particular host genotype, then being different at all is good,” coauthor Todd Schlenke of Reed College in Oregon told National Geographic’s Not Exactly Rocket Science. “As long as you’re different from your parents, you’ll do well.”

How fruit flies are able to increase the frequency of genetic recombination in their eggs remains unclear, Singh told Nature. “We really have absolutely no idea what the signal could be.” One possibility is that those eggs that undergo greater recombination when the female fly is infected are more likely to become viable embryos. “We have a lot of experiments planned for that in the future,” said Singh.