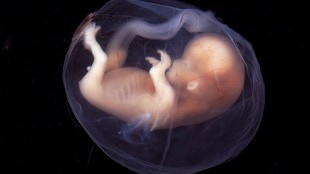 Researchers used DNA circulating in a pregnant mother’s blood to predict which genetic variants were inherited by the fetus, with a reported 98 percent accuracy when compared to cord blood collected after birth, according to a study published in Science Translational Medicine (June 6). The University of Washington, Seattle, team also identified 39 of the 44 de novo mutations that occurred, but also identified false positives. Their new technique has the potential to replace invasive methods of investigating the fetal genome that sample the placental tissue or amniotic fluid, which can trigger a miscarriage.

“This work opens up the possibility that we will be able to scan the whole genome of the fetus for more than 3,000 single-gene disorders through a single, non-invasive test,” co-author Jay Shendure told BBC News.

About 13 percent of the cell-free DNA in a pregnant mother’s blood plasma is...

The researchers also used a shallower DNA sequencing technique on another fetus at 8.2 weeks into the pregnancy, and predicted its inherited variants with 95% accuracy.

Because such tests may prompt parents to abort fetuses with severe developmental abnormalities, they come with a suite of ethical questions. “Catching everything in the basket” may have its drawbacks, Françoise Baylis, a bioethicist at Dalhousie University in Halifax, Canada told Nature. “As technology moves on, so does our willingness to think of difference as a defect.”