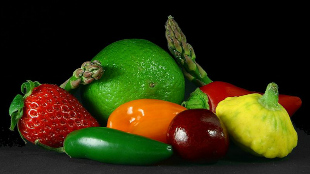 WIKIMEDIA, JON SULLIVANAsthma rates in Western countries have surged in recent decades, perhaps in part because of eating habits that largely ignore fiber. Researchers have shown that mice fed a low-fiber diet reacted more strongly with asthma-like symptoms to allergens than mice that were given more fiber.

It appears that gut bacteria are mediating these responses. Animals that ate pectin had stool with more bacteria that produce circulating short chain fatty acids, Benjamin Marsland from the University of Lausanne in Switzerland reported in Nature Medicine this week (January 5). He and his colleagues treated mice with one such fatty acid, propionate. Again, the animals showed reduced asthmatic responses to allergens compared to animals not given propionate, and they had altered production of immune cells in the bone marrow.

“Our study is the first to show that diet can influence the production of immune cells in the bone marrow, which...

“We know that bacteria in the gut have an effect on allergic airway disease in the lung, however nobody has really explained why,” Christian Taube at Leiden University Medical Center in the Netherlands told New Scientist. “This work provides a mechanism for this link. It may also help to partially explain the asthma epidemic we have seen in the Western world.”

According to a press release, the low fiber diet that the mice ate pretty much mimicked the fiber levels of Western diets. “We plan to conduct clinical studies to find out how a diet enriched with fermentable fibres affects allergies and inflammations,” Marsland said in the release.