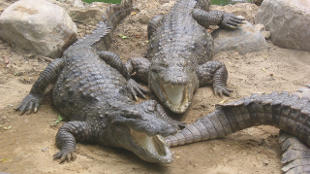 WIKIMEDIA, KMANOJWorking in a life-science lab can be difficult. But misbalanced ultracentrifuges, spilled reagents, and wasted resources can pale in comparison to the trouble a hapless biologist can encounter in the field. Following on this spring’s wildly entertaining confessions of laboratory mishaps on Reddit, researchers have been sharing their most humbling fieldwork flubs on Twitter under the hashtag #fieldworkfail. Some highlights:

‏arcticmarci: “Found the only gloves in the heli to collect poop from a muskox but the bastards cut off the fingers.”

‏Avibase: “I once started running after used toilet paper in the tundra thinking they were my field notes being blow away by wind”

‏NerdyChristie: “Pissed off a very large monk seal. Had to spend half my dive making sure it didn't steal my buddy's fins.”

‏KamounLab: “You go there to chase insects and instead insects start...

And the pièce de résistance

‏AgataStaniewicz: “Accidentally glued myself to a crocodile while attaching a radio transmitter.”