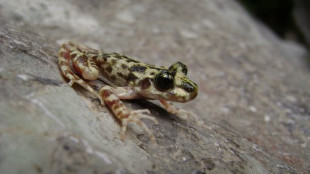 WIKIMEDIA, TUURIO AND WALLIEChytridiomycosis, a disease caused by the chytrid fungus Batrachochytrium dendrobatidis, threatens amphibian species the world over. But a team of researchers from Spain and the U.K. has successfully cured a wild population of Mallorcan midwife toads (Alytes muletensis), the group reported yesterday (November 18) in Biology Letters.

“This is the first time that chytrid has ever been successfully eliminated from a wild population,” said study coauthor Jaime Bosch of Madrid’s National Museum of Natural Science in a press release.

The Mallorcan midwife toad is endemic to the island of Mallorca, where chytrid fungus was accidentally introduced in the 1990s. Bosch’s team began trying to eliminate the disease in 2009, but while tadpoles treated with itraconazole in the lab were cured, the amphibians were reinfected once returned to their environment—even after their seasonal ponds had dried and refilled with autumn rains....

In 2013, the team removed tadpoles for lab treatments again, but also treated the seasonal pond locations with an industrial disinfectant called Virkon S. “The disinfectant was liberally applied to all rock, gravel, crevice and vegetated areas that surrounded the immediate environs of each breeding site,” the authors wrote. “We acknowledge that Virkon S is a controversial chemical to use environmentally and our use of it was driven by the urgency of midwife decline on Mallorca.” As the group reported this week, four of five treated ponds have remained fungus-free.

Researchers caution that, while impressive, the study’s success is not necessarily applicable to more-complex environments. Karen Lips, a biologist at the University of Maryland who helped discover B. dendrobatidis, told Wired she doubts the system would be effective in the rainforest of Panama, where she works. “Sterilizing one pond is not going to do it. You’d have to sterilize the entire jungle.”

Rock-bottomed ponds on Mallorca made it easier to disinfect the area, and the dry environment meant that no wet leaves would last to harbor the fungus through a season. Still, Lips told Nature, “I think this shows there are certain things you can do.”

“Every now and again, [the amphibian science] community needs a win. And this is one of those wins,” Brian Gratwicke of the Smithsonian Conservation Biology Institute in Washington, D.C., told Wired.