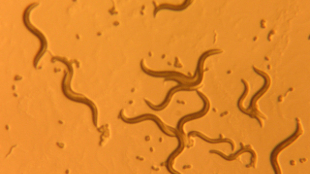 FLICKR, SNICKCLUNKUsing an image-recognition system that tracks the movement of nematode worms and a confocal microscope with a motorized stage, Princeton’s Jeffrey Nguyen and colleagues have devised a way to record the neural activity of their brains in real time as the animals swam around their Petri-dish environment. Imaging a thin slice of brain at a time and moving through five sections per second, the researchers used the system to build whole-brain maps of neural activity. The results were published on the preprint server ArXiv earlier this month (January 14).

“The ability to acquire large-scale recordings of neuronal activity in awake and unrestrained animals poses a major challenge for studying neural coding of animal behavior,” the team wrote in their paper. “We believe this work represents a significant advance towards studying population dynamics of a brain-sized neural network for coding behavior.”

Comparing the worms’ neural activity with their overall movements, the team identified specific neurons that corresponded to specific actions, such as moving forward, moving backward, or turning, consistent with previous studies.

Read about other efforts to record neural activity in freely moving animals in “Brains in Action,” The Scientist, February 2014.