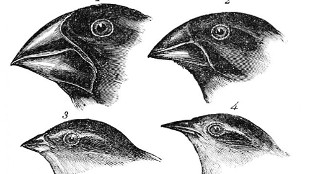 The beak shape variety among the species of Galápagos finches that inspired Darwin’s theory of evolution is largely due to a single gene that has been shaped by species interbreeding as well as evolutionary adaptation, according to a study published this week (February 11) in Nature.

Researchers from the Uppsala and Umeå Universities in Sweden and from Princeton University sequenced the full genomes of 120 birds representing the 14 defined Galápagos finch species, a related species from nearby Cocos Island, and two other related species from the Caribbean. By comparing the genomes of two species with blunt beaks—ideal for eating seeds and insects—with those from two pointy-beaked species—specialized for eating cactus nectar and pulp—the scientists found 15 genomic regions linked to beak shape. Most striking were two variants of a single gene, ALX1, which had an ancestral version associated with pointed beaks and a derived...

Differences in ALX1, a gene that when mutated in humans can cause cleft palate and skull malformation, were apparent not only among species but within them, as well. These differences revealed that recent and rapid changes in the usually blunt shape of the medium ground finch (Geospiza fortis) beak were the result of interbreeding with other finch species. “This is a very exciting discovery for us,” study coauthor Rosemary Grant of Princeton University told BBC News. “Now we know that hybridization mixed the different variants of an important gene, ALX1.”

The genomic data also called into question the current species classifications. Two species—the sharp-beaked ground finch (Geospiza difficilis) and the large cactus finch (Geospiza conirostris)—appeared on multiple branches of the evolutionary tree, suggesting that they are actually three and two separate species, respectively. The total number of Galápagos finch species may thus be 17 instead of 14, the authors suggested in their paper.