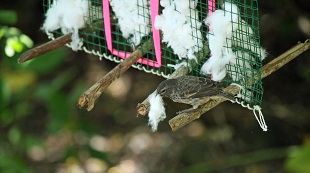 UNIVERSITY OF UTAH, SARAH KNUTIEOffering pesticide-soaked cotton balls to Darwin’s finches could help them stave off a deadly parasite, according to a study published this week (May 6) in Current Biology by a team led by the University of Utah’s Dale Clayton. The invasive parasitic nest fly (Philornis downsi), first seen in the Galapagos Islands in 1997, lays its eggs in finch nests. Hatched larvae feast on the blood of the nestlings, reducing the number that lives into adulthood. “Some years, we’ve seen no nestlings at all in an area survive,” Clayton told ScienceNOW. “And some species are getting absolutely hammered by this fly,” like the mangrove finch (Camarhynchus heliobates). Scientists have sprayed nests with pesticide, but the nests are often hard to find or to reach.

“This is one of the most incredibly clever bits of practical conservation I’ve seen in my entire career,” conservation ecologist Stuart Pimm of Duke University, who was not involved in the study, told ScienceNOW.

“Now the challenge is to devise a method whereby a large amount of cotton with substantial quantity of insecticide can be delivered reliably to nests,” evolutionary biologist Peter Grant from Princeton University, who has worked with Darwin’s finches for more than 40 years told Nature News.