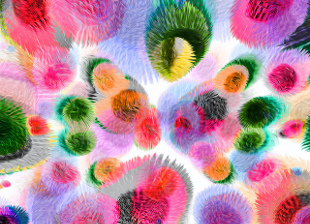 FLICKR, RUSS SEIDELTo identify a person from their fingerprint, computers traditionally require a clean image of the patterns in the skin and a pre-recorded fingerprint sample to match it to. But a research group led by Jan Halámek from the University at Albany, State University of New York, has taken fingerprint identification to a new level by removing the amino acids from a fingerprint and using them to determine whether the culprit was male or female. The results were published last month (October 13) in Analytical Chemistry.

Males and females leave different levels and compositions of amino acids in their fingerprints. Previous studies had used the amino acid composition in fingerprints to differentiate between the two, but relied on instruments such as mass spectrometers. Halámek and his team devised a simpler method.

The team had volunteers—three males and three females—press their fingertips against a polyethylene surface. To extract...

When they used a bioassay to test the resulting compounds, the team was successfully able to distinguish between the male and female subjects. Among other differences, females leave higher levels of amino acids in their fingerprints overall. The female subjects also left fingerprints on a door knob, a laminate desktop, a composite benchtop, and a computer screen, and the researchers were able to extract the amino acids from these surfaces.

The method seemed simple and cheap, Stephen Morgan, a chemist at the University of South Carolina, told Chemical & Engineering News—a benefit compared to other options. Halámek has since transferred the reaction components onto paper to make a quick, easy-to-read test similar to pregnancy strips or glucometers, which can be used and understood by people without scientific backgrounds, he told Chemical & Engineering News.