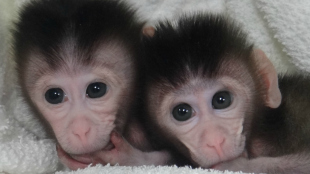 Researchers achieved precise gene modification in monkeys.CELL, NIU ET AL.Sister macaques Ningning and Mingming are the first born of a cohort of 10 primates whose genomes have been monkeyed with using CRISPR/Cas9 technology. The other eight macaques are still in utero. Although scientists have successfully edited the genomes of rats, mice, and other animals using CRISPR, this is the first demonstration of the technique in primates.

“People have been looking for primate models for a whole list of diseases, but in the past it’s been either completely unfeasible, or incredibly expensive. This is saying we can do this relatively inexpensively and quickly, and that is a major advance,” Nelson Freimer of the University of California, Los Angeles, told The Guardian.

CRISPR allows for precise genome editing in a relatively short amount of time. Using a guide RNA and an enzyme called Cas9, researchers can fix...

CRISPR has been used to alter the genomes in human cells, and this latest advance in whole primates suggests that it could be applied in people in the future—but much has to be worked out first. “We believe the success of this strategy in nonhuman primates gives lots of potential for its application in humans, but we think due to the safety issue, it will take a long way for expanding this strategy to human embryos,” Wezhi Ji, a researcher at the Yunnan Key Laboratory of Primate Biomedical Research and one of the authors of the study, told MIT Technology Review.