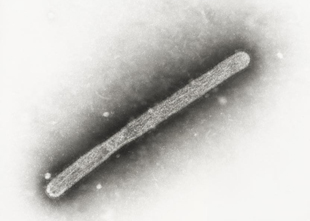 H5N1 virionCDC, CYNTHIA GOLDSMITH, JACKIE KATZA patient hospitalized in Alberta, Canada, died January 3 from a confirmed case of the H5N1 avian influenza virus, Canadian Health Minister Rona Ambrose announced this week (January 8). According to CTV News, the female patient, whose name has not been released, returned from Beijing, China, to Edmonton via Vancouver on December 27 and reported feeling ill during the trip. This case of H5N1 was the first in North America, according to a map created by the US Centers for Disease Control and Prevention, detailing the number, location, and outcome of the other 647 cases reported worldwide since 2003.

On its website, the CDC explains that H5N1 occurs mainly in birds, among which it is extremely contagious and can be deadly. H5N1 has also been found in a domestic dog, in pigs, in domestic cats, and in humans. The virus is generally...

“This case of avian flu in Alberta is very rare and isolated,” Alberta health minister Fred Horne said at a press conference included in the CTV story. “Other Albertans are not at risk.” According to CTV, public health officials said that none of the patient’s close contacts have fallen ill, and that she was not in contact with birds in Beijing, where H5N1 infection in poultry has not yet been reported.