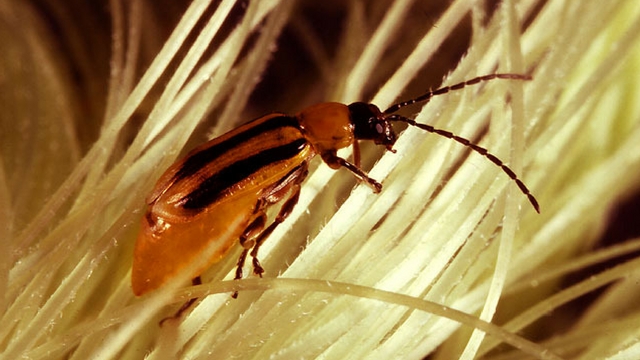 This month, the US Environmental Protection Agency (EPA) approved the first plant-incorporated protectant (PIP) of its kind based on RNA interference (RNAi) technology, engineered to target western corn rootworms (Diabrotica virgifera virgifera), The Atlantic reports. According to a statement issued this month (June 15) by the EPA, four SmartStax Pro seed products with the RNAi-based PIP have been registered thus far.

PIPs are pesticides that plants are able to produce themselves, thanks to modifications to the plants’ genes, according to the EPA. While some crops already contain RNAi-technology for the purposes of fending off certain viruses, among other uses, this is the first insecticide to take advantage of this technology.

RNAi is a ubiquitous process across plant and animal cells, during which short RNA molecules hinder gene expression by homing in on and subsequently cleaving their...

These SmartStax Pro corn seed products, The Atlantic reports, will incorporate DvSnf7 dsRNA. As prior research has demonstrated, this dsRNA, or double-stranded RNA, is specific to the western corn rootworm’s Snf7 gene. When a DvSnf7 dsRNA-containing plant is consumed by a corn rootworm, the dsRNA will initiate RNAi within the worm, leading to the suppression of this critical gene, and eventually, the rootworm’s demise.

The corn rootworm is “a devastating corn pest that has developed resistance to several other pesticides,” according to the EPA statement, that “can collectively cost corn growers in the U.S. over a billion dollars in terms of control costs and yield losses.”

According to The Atlantic, the EPA’s recent approval of the RNAi-based insecticide was “surprisingly low-key,” compared to the hullabaloo surrounding RNAi-based technology in the past.