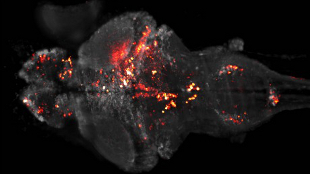 Brain of a zebrafish larva showing near-simultaneous activation of a large population of neurons (in red). MISHA B. ARENS AND PHILIPP J. KELLERResearchers have recorded and visualized the activity of nearly every individual neuron in the larval zebrafish brain in real time, according to a study published this week (March 18) in Nature Methods. The technique should help scientists to better understand how local circuits of neurons form large-scale networks across different brain regions.

“It allows a much better view of the dynamics throughout the brain during different behaviors and during learning paradigms,” Joseph Fetcho, a neurobiologist at Cornell University in New York, told Nature.

Last year, Misha Ahrens and Philipp Keller, neurobiologists at the Janelia Farm Research Campus in Ashburn, Virginia, imaged the brain activity of zebrafish larvae as they navigated through a virtual reality environment. The researchers used light-sheet photography, in which thin sheets of...

For the latest study, the researchers have improved the system to record the activity of a greater number of neurons—more than 80 percent of the 100,000 neurons in the brain of zebrafish larvae—and at higher speed, capturing high-resolution images every 30 milliseconds. The scans were then stitched together to make a three-dimensional video revealing, among other things, the temporal integration of a neuronal circuit in the hindbrain that likely controls swimming movements with another group of nerve cells in the upper spinal cord.

“It’s phenomenal,” Rafael Yuste, a neuroscientist at Columbia University in New York, told Nature. “It is a bright star now in the literature, suggesting that it is not crazy to map every neuron in the brain of an animal.”