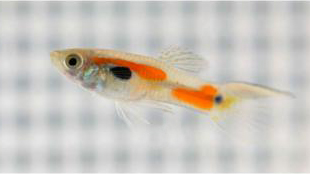 Male guppyEUREKALERT, ANNA PRICEMale guppies’ vibrant colors and the yellow and black stripes that give the zebrafish its name are both products of pigment cells. Two research groups have now learned more about how these cells are organized to form these characteristic patterns.

In work published in PLOS One this week (January 22), a team from the Max Planck Institute for Developmental Biology in Tübingen, Germany, showed that at least two of three types of pigment cells—melanophores, xanthophores, and iridophores—contribute to male guppies’ colors. Using electron microscopy, the researchers found that pigment layers in both the dermis and hypodermis played a role in generating the fishes’ spots. Iridophores were present in each color trait the researchers studied, which they wrote suggested “that complex interactions between different chromatophore types both may be involved in establishing color patterns and [enhancing] color signals.”

Meanwhile, Hiroaki Yamanaka and Shigeru Kondo of Osaka University in...

While the in vitro system may be useful for studying pigment cell communication, it is still unclear how biologically relevant the findings are. Current Biology Editor Florian Maderspacher, who studied pigment patterns in zebrafish during his graduate training, told National Geographic’s Not Exactly Rocket Science that “the fact that it’s in a culture dish [means] we have no real way of knowing that the cell behaviors they document are really what underlies stripe formation.”