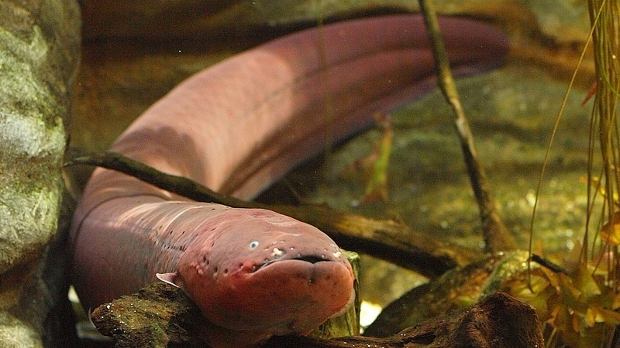 WIKIMEDIA, OPENCAGEThe electric eels that inhabit the Amazon River basin have long fascinated scientists and explorers. At the dawn of the 19th century, Prussian naturalist and explorer Alexander von Humboldt described Venezuelan fisherman capturing electric eels (Electrophorus electricus) by “fishing with horses.” The natives would lead horses into shallow pools where the fish would reportedly jump from the water, shocking the horses until the eels fell exhausted back into the water. The fishermen would then scoop up their quarry. The veracity of the account was long debated, but now a researcher at Vanderbilt University has verified the behavior in electric eels, which are actually a type of knifefish, publishing his results in PNAS this week (June 6).

The defensive behavior, neuroscientist Kenneth Catania wrote in his paper, “consists of an approach and leap out of the water during which the eel presses its chin against a threatening...

So Catania set up experiments where he would stick a fake alligator head, lined with LED lights, into tanks holding the eels to record the voltage of the shocks delivered by the leaping fish. He found that as the eel increased the height that it slithered up the perceived threat above the water, the power of its electric shock rose. The observation confirms the seemingly tall tales told by van Humboldt. “I certainly thought it was a crazy story when I did consider it,” Catania told The Christian Science Monitor, “but I don’t anymore. At this point I don’t think he exaggerated one bit.”

The study reveals another aspect of electric eel behavior that was previously considered the stuff of myth and legend. “In combination with [Catania’s] previous studies, these results are literally rewriting the book on what we know about electric behaviors of the electric eel,” James Albert, a biologist at the University of Louisiana at Lafayette who also studies electric eels, told Smithsonian.

Correction (June 9): The original version of this article incorrectly indicated that the eel's jumping behavior was directed at prey. In fact, it seems to be a predation avoidance strategy. The Scientist regrets the error.