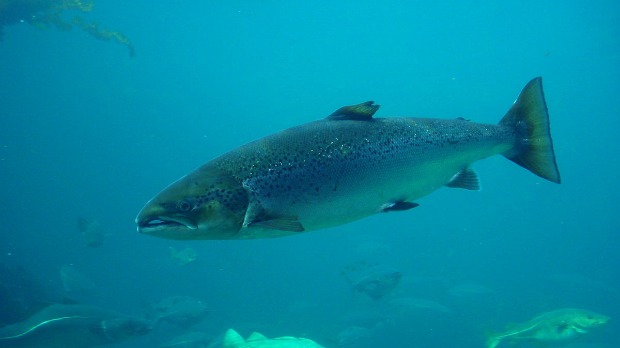 WIKIPEDIA, AARON GUSTAFSONThe age—and, therefore, size—of salmon when they mature is controlled by the same gene in males and females, but acts differently in the sexes, scientists reported today (November 5) in Nature. VGLL3 promotes earlier maturation in males and later maturation in females.

The study describes how a single gene can drive sex differences in the optimal form of a trait, in this case, smaller size at maturity for males and larger size for females. “Since different forms of the gene are favored in males and females, natural selection favors both forms being maintained in the population. This leads to the variation in age at maturity being maintained, which promotes the stability and resilience of Atlantic salmon populations,” Jaakko Erkinaro, a coauthor from the Natural Resources Institute Finland, said in a statement.

Examining genetic information from 1,500 salmon, the researchers found two variants of VGLL3, one...

The scientists said the results could potentially improve fisheries management. “The ‘large salmon gene’ could be used to reintroduce individuals more likely to mature later into populations where large salmon once occurred,” Erkinaro said.

In another study, published today in Current Biology, researchers from Washington University School of Medicine discovered an enzyme that enhances zebrafish’s ability to see in the red and infrared—an especially handy sense for poor visibility. “For example, when salmon migrate from the ocean to inland streams, they turn on this enzyme, activating a chemical reaction that shifts the visual system, helping the fish peer more deeply into murky water.” senior author Joseph Corbo said in a statement.

The enzyme, Cyp27c1, works by converting vitamin A1 into vitamin A2, which subsequently shifts the spectral sensitivity of the eye. The researchers also found Cyp27c1 present in the part of the bullfrog eye that peers down into water, but not the part that looks up into air.

“We don't know when in the course of evolution the Cyp27c1 enzyme first acquired the function it has today,” Corbo told Reuters. “However, the fact that the same enzyme is used by both fish and amphibians suggests that this function originated hundreds of millions of years ago.”