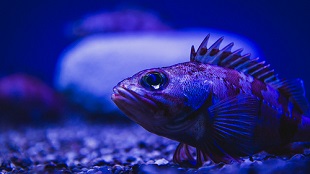 FLICKR, BENSON KUAFish that communicate using bioluminescence show faster rates of speciation than those that only emit light for the purpose of camouflage, according to a study published last month (February 21) in Marine Biology.

That the open ocean lacks conspicuous geographic barriers is often cited as a reason for reduced species richness in this environment. Two taxonomic families—bristlemouth fish (Gonostomatidae) and lanternfish (Myctophidae)—sit at opposite ends of the speciation spectrum of deep sea fish. Bristlemouths, arguably the most abundant vertebrates on Earth, have only 21 species. Lanternfish, on the other hand, include more than 250 species.

To explore this dramatic difference, researchers from the University of Kansas and their colleagues studied the patterns of photophores—light-emitting organs—across several clades of of deep-sea fish. They found that lanternfish and dragonfish, which both have complex species-specific photophore patterns on their lateral sides and tails, showed more speciation. Lateral side and...

Sticklebacks, however, only have photophores on their dorsal sides; this trait is connected to camouflage, but not interspecific signaling. Lanternfish also have photoreceptors in their eyes to see bioluminescence from up to 100 feet away, which sticklebacks lack.

“Bioluminescent signaling may be critical to diversification of fishes in the deep sea,” study coauthor Leo Smith, an assistant curator of ichthyology at the University of Kansas, said in a statement.