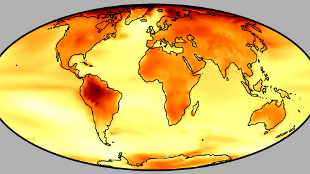 An editorial published Friday (September 2) in the journal Remote Sensing points to “fundamental methodological errors” and “false claims” in a paper that challenged current estimates of climate change, published in the same journal just 6 weeks ago.

When the paper was first published, it was touted in the media as evidence that the global warming threat may be overblown. The authors used NASA satellite data to suggest that climate models overestimate the amount of heat the atmosphere retains, and thus misjudge the warming greenhouse effect. Climate researchers weren’t convinced, however.

The paper “essentially ignored the scientific arguments of its opponents,” Wolfgang Wagner of Vienna University of Technology, the journal’s editor-in-chief, wrote in the editorial. “This…was missed in the review process, explaining why I perceive this paper to be fundamentally flawed and therefore wrongly accepted by the journal.”

The journal has not stated whether or not it plans to retract the paper, but Wagner hopes his resignation will signal that “Remote Sensing takes the review process very seriously.”