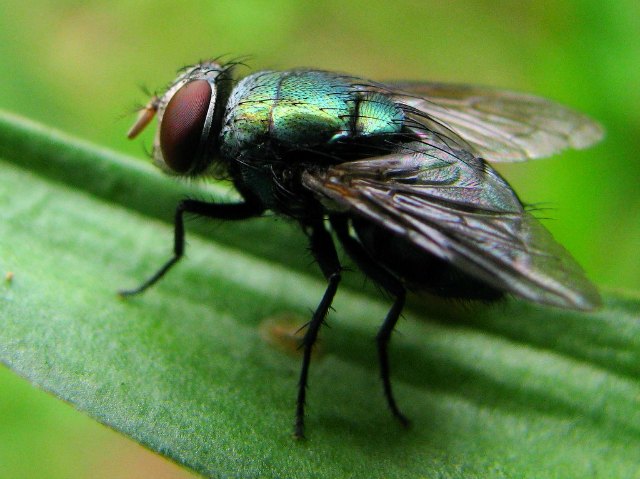 Chrysomya megacephalaWIKIMEDIA, RHITAMVAR RAYResearchers have undertaken a massive sequencing effort to analyze the whole genomes of 116 houseflies (Musca domestica) and blowflies (Chrysomya megacephala)—plus all their resident microbes. These metagenomes, along with laboratory experiments, point to flies’ ability to pick up bacteria on their legs and deposit their microbial passengers elsewhere, revealing the potential for flies to transfer potentially pathogenic bacteria.

“We believe that this may show a mechanism for pathogen transmission that has been overlooked by public health officials, and flies may contribute to the rapid transmission of pathogens in outbreak situations,” coauthor Donald Bryant of Penn State University tells BBC News. “It will really make you think twice about eating that potato salad that's been sitting out at your next picnic.”

The insects were captured from various sites around the world. The most-common bacterial phyla represented among the flies’ microbiomes...

The team also broke down the blowfly microbiome by host body part, namely, head, thorax, abdomen, and leg plus wing. The limbs and wings were distinguishable by the presence of Helicobacter species, including H. pylori, which can cause ulcers. All 15 of the host flies that had Helicobacter species had been caught in Brazil, and the authors suspect the flies picked the bacteria up from sewage.

“Whether H. pylori survives and persists on the outer body of the fly has not been determined,” the researchers wrote in their report. However, a laboratory experiment demonstrated flies could pick up E. coli after walking on a Petri dish covered in the bacteria, and then spread the colonies to sterile plates they later visited.

“Our study has shown that bacteria can ‘fly’ by hitching a ride on common flies,” coauthor Stephan Schuster, a research director at the Singapore Centre for Environmental Life Sciences Engineering at Nanyang Technological University, Singapore, says in a press release. “They pick up the microbiome on their feet, spread them across their wings in a similar way like how we might comb our hair, and then proceed to disperse them on surfaces that they land on.”