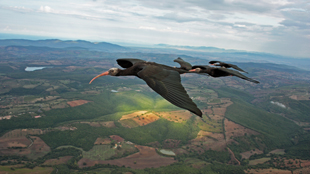 MARKUS UNSÖLD, WALDRAPPTEAMFor years, scientists had theorized that birds fly in V-shaped formations because they gain an energetic benefit, but “all it was, was theory—no one was ever actually able to measure anything,” Steven Portugal of the Royal Veterinary College in London told NPR. Portugal and colleagues showed in Nature yesterday (January 16) that northern bald ibises (Geronticus eremita) maintained ideal aerodynamic placement and wing flapping when flying in a V shape, confirming theoretical projections.

The research team monitored a flock of 14 bald ibises on its first migration from Austria to Italy using highly sensitive tracking devices on each bird that recorded the animal’s location within a foot, as well as its wing flapping and velocity. They found that birds regularly flew one meter behind and one meter to the side of and flapped in phase with the bird in front, most likely to catch...

“From a behavioral perspective it’s really a breakthrough,” David Lentink of Stanford University in Palo Alto, California, who was not involved in the work, told ScienceNOW. “Showing that birds care about syncing their wing beats is definitely an important insight that we didn’t have before.”

There are still questions to be answered. Michael Dickinson of the University of Washington told NPR that, while the findings align with predictions about energy use in birds, the researchers did not assess enough factors, such as the ibises’ heart rates, to see if they were actually using less energy. “Although this is a cool study, it is not a smoking gun,” Dickinson said.