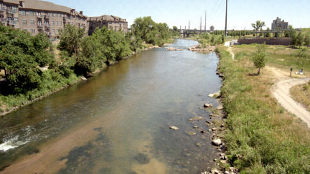 South Platte River, Denver, ColoradoMalepheasent Surveying the South Platte River system, a watershed that flows east from streams high in the Rocky Mountains of Colorado, researchers have found that there are far more antibiotic resistance genes (AGR) carried by sediment-dwelling bacteria in areas affected by humans than more pristine sites. The report, published this week (October 17) in Environmental Science and Technology, highlights how outflow from water-treatment plants contributes to the watershed-based spread of antibiotic resistance to pathogenic microbes—a growing threat to human health.

Over the course of a year, scientists at Virginia Tech and Colorado State University sampled 10 sites along the watershed for integrons sul1 and tet(W), genetic elements which disseminate genes for resistance to two different types of antibiotics used in animals and humans. They found that concentrations of sul1 were 1,000-10,000 higher in sites with water-treatment plants and animal-feeding operations just...

Resistance genes do occur naturally in the environment, of course, but it is important to quantify “the anthropogenic load, and where those genes come from,” Joakim Larsson of the University of Gothenburg, Sweden, told Nature. That’s especially true now, as treated wastewater becomes more widely used in regions where water is scarce.