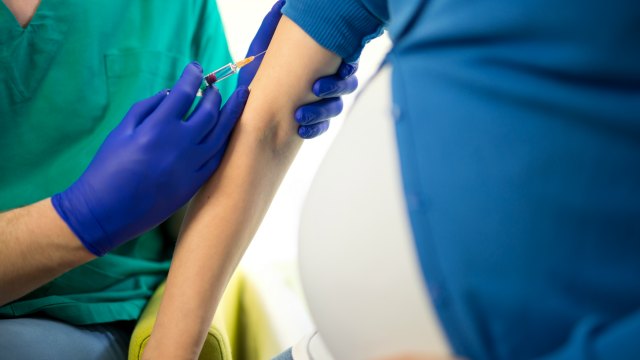 ISTOCK, JOVANMANDICFrom a study of more than 400,000 babies, researchers report in Pediatrics this week (February 20) that influenza and whooping cough vaccines are safe during pregnancy. The children of moms who received the immunizations while expecting had no higher risk of hospitalization or death in the first six months of life than kids of other moms.

“The fact that the authors found no reason to believe exposure to vaccines during pregnancy caused serious harm to infants in the first six months of life is reassuring,” Annette Regan, a public health researcher at Curtin University in Australia, tells Reuters by email. “While other studies have looked at hospital admissions, this is the first study to evaluate the impact on mortality.”

“Our study helps strengthen the growing evidence of long-term safety of vaccination in pregnancy for infants,” the researchers write in their report.

The researchers did find a link between the Tdap vaccine and hospitalizations, namely, babies were at a greater risk of going to the hospital for respiratory problems if their moms had not received the Tdap vaccine when they were pregnant. Still, the authors point out, only 3 percent of the babies were hospitalized for pertussis. “This could indicate that infants with pertussis are not being appropriately diagnosed and tested,” they suggest in their study. “It is also possible that other factors (eg, the healthy adherer effect and other differences in people who choose vaccination and those who do not) are contributing to this finding.”