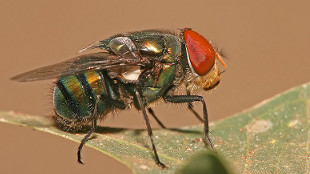 Wikimedia, Muhammad Mahdi KarimThe flies that feast on rotting flesh collect a genetic inventory of the animals in their forest homes in their stomachs, according to a study published today (January 7) in Molecular Ecology. Though the researchers originally intended to study whether the flies could transfer the causative agent of anthrax, they soon discovered fly guts contained discernable fragments of mammalian DNA, and realized the flies might serve as a useful way to track the species of inaccessible forests.

The researchers conducted a series of experiments in which they trapped flies on bait meat in Taï National Park in Côte d'Ivoire (the Ivory Coast) and the Kirindy Reserve in Madagascar. From the 40 percent of...

In addition to assessing biodiversity, researchers hope that fly tracking could help monitor endangered species or disease outbreaks in animal populations, such as the Ebola outbreak that killed thousands of gorillas in the Republic of Congo and Gabon a decade ago.